I headed to Austria after spending a fun time in Germany with Paul the friend I had met in Malta. Now it was time to get to the mountains though and I could hear them calling my name. I got a free ride from Padeborn to Linz and spent 48 euros taking a train to Innsbruck. Innsbruck is a famous town for climbing and has spawned some very impressive mountaineers such as Hermann Buhl. I got off the train at 9pm. A little later then I had hoped but figured it wouldnt be to hard to find a place to stay. That was a mistake. I wandered around the town for 3 hours until i finally gave up and resolved ot finding a place to put my tent up in a park. It was around 11:30pm and I was fully decked out in my backpacks, standing at a bus stop not really thinking about much. I wasnt worried about finding a place to stay I knew I would I was just not really looking forward to walking to it! A guy walked up to me who spoke very little english and after a little conversation he told me to go to the Youth Hostel on the other side of town. He also told me that he would drive me there! A guy who says he lives in another village and is on a walk through a different town just for the heck of it at almost midnight wants to give me a ride....so what do I do? Well I am tired of walking around town so of course I say sure! He was a nice guy though and actually brought me to the youth hostel, what luck!
Read More 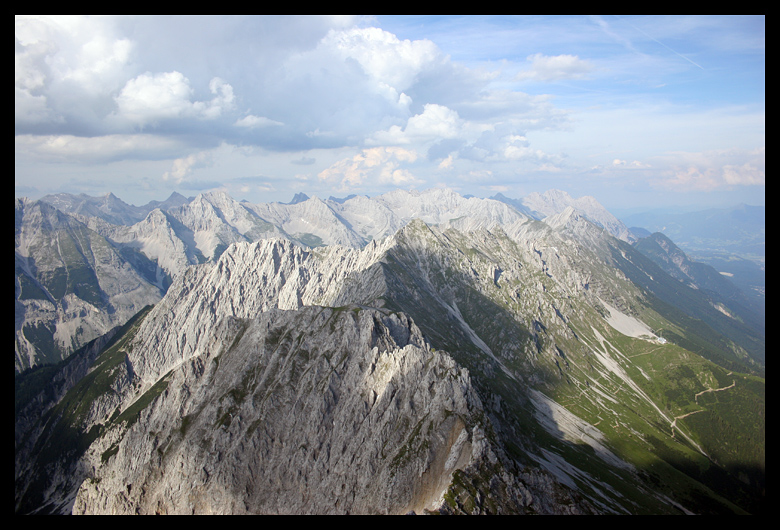 Finally at the summit of Brandjoch. At 2559meters (8395.669 ft. to the American!) it was the highest peak I had climbed on the trip. Excellent views were in every direction as the weather was still holding amazingly. I met a few guys who had also just summited and this was their reaction "You just came from where?! The ridge? With those shoes? No harness?" After a bit of talking they said they would give me a ridge back to the hostel if I walked down with them. Yay! The tram is visible far off on the ridge.