I have spent the last 9 days in Mallorca and island off the Iberian Peninsula belonging to Spain. The island is considered a Mecca of deep water soloing which they call Psicobloc. Recently what is possibly one of the hardest routes in the world was put up by Chris Sharma on Es Pontas. It is considered to be 5.15a or 9a by Euro standards. Although he does not rate the climbs himself I'm sure the repeats will be few and far between.
I met up with Shasta in Wales and we tooled around that country for a while before deciding to head to warmer areas. Looking at tickets we decided to head to Spain for a week and a half and have some fun at deep water soloing, we had hoped to climb a 7 pitch route on a mountain called Sa Gubia but were set back by lack of gear.
We first arrived and found a bus to S. Arenal where we trying around for a hostel finding one for 30 Euros per night. The hostels here are not your normal hostel as they are bed and breakfasts and proper dorm hostels are pretty much non existent. The beach is 4 miles long and is sand all the way. Besides the sand is thousands of bodies lined on every little area. To me that is not a fun way to spend time so we decided to bail on the crowded beach scene and see if we couldn't find something a little more pleasant. We headed to town called Cala Dòr and had to settle on a an apartment style renting accommodation for the night which was 40 Euros, as cheap as any bed and breakfast was in the area. This was a really nice place with a kitchen and a living room! Still though we knew this was more then we wanted to spend and resolved the next day to finding some proper camping accommodation. We had however heard that it is illegal on the island so figured it could be tuff. We packed our bags for the walk to Cala Sa Nau. We walked to the beach to find a beautiful area surrounded by nice looking climbing. The cliffs got bigger as they went out and there were plenty of areas we could tent.
Read More 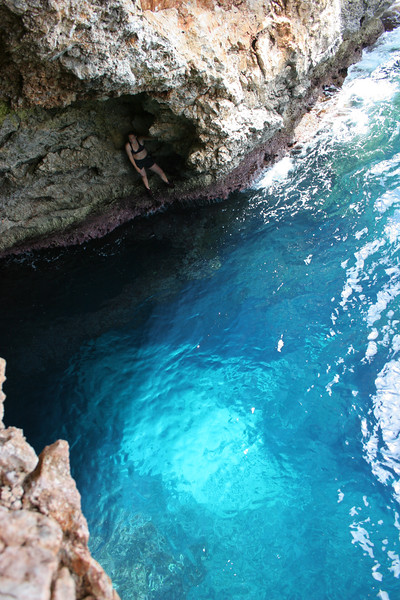 After some jumping of the course the reason we were there was to climb! This was a great route you could follow through the overhang or traverse out the right and over the top. The water was incredibly clear and beautiful and it was hard to climb over the top with the water so inviting.